Every year Jews tell the story of the Exodus from Egypt at our seders. Every year we tell the same story, using the same words, from the same Haggadah. Even though we appreciate the story, it gets boring hearing it told the same exact way year after year after year. There is a Women's Haggadah, a Green Haggadah, a Gay Haggadah, and even a Socialist Haggadah, but (until now) you haven't been able to find a funny Haggadah.  With sincere apologies to Eric Idle, John Cleese, and anyone who takes religion too seriously, here is the 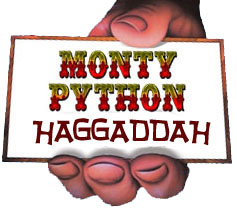 Moses is galloping (skipping on foot while clopping coconuts together to sound like hoofbeats) across the desert. He comes to a burning bush.

Moses: I never wanted to do this job of deliverance in the first place. At least delivering pizzas pays good tips!  I wanted to be a lumberjack, even though its a bit hard doing that in the desert.

(Israelites sing)
Oh, we're Egyptian slaves. It's not OK.
We work all night and we work all day.
We quarry blocks and make mud bricks
And want to run away!

When Pharaoh asks for proof that Moses speaks for God, he shows Pharaoh the holy hand grenade and Aaron pulls the holy pin, making mincemeat of half the advisors.

The morning after the final plague, the Egyptian garbage collectors roam the streets calling, "Bring out your dead!"  People bring corpses of plague victims to the dead cart.

When they start to pick up one body, one of the collectors says, "Wait a bit.  He's not dead.  He's just resting." A lightning bolt comes out of the sky, hitting the body and killing it.  The collectors smile and heave it onto the cart.

Stop! This is getting too silly!

Scene 6: Arriving at the Red Sea.

Aaron watches awestruck, then asks Moses how he was able to answer the questions so well. Moses says, "You have to know these sorts of things when you're a leader of the Israelites, you know."

Narrator:  Forty years later, after wandering around in the desert searching for the Holy Grail, Moses and Joshua stumble across a dragon ship and sail across the river Jordan to swelling music, but just as everything looks like there will be a happy ending ....

And now for something completely different.

Scene 9:  Dinner
It's time to eat dinner before finishing the rest of the Haggadah.  While eating dinner, make sure to defend yourself against the possibility that the person to your right will attack you with a banana. 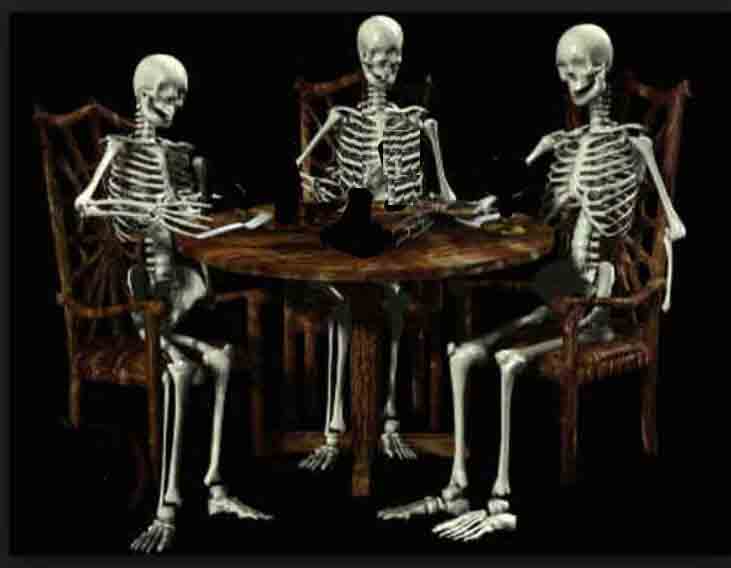 Narrator:  We conclude tonight's program with the question, 'Is there life after death?'. And here to discuss this question are three dead people.  The late Pharaoh Ramses, former ruler of the kingdom of Egypt, circa 1400 BCE; the late Moshe ben Amram, tribal spokesperson and record holder for longest road trip across the wilderness; and putting forward the view of the Powers that Be, the prophet Elijah the Gileadite. Gentlemen, is there life after death or not? (Prolonged silence)

Well there we have it!  Three say "No". On next week's program we'll be discussing the question 'Does the state of And until then, goodnight.

Please email suggestions for how to improve this Monty Python Haggadah to kayton@alum.mit.edu.  This page may be reprinted for personal or family use, but it is NOT okay to reprint it or use it for commercial purposes without permission.  (c) 2003, 2006.  Thanks to the Coplan family and David Frank for their additions to make this haggadah even funnier (well, it's funny if you happen to enjoy Monty Python.)

If you liked this Haggadah , you might also enjoy the Facebook Haggadah and Grad Student Haggadah by Carl Elkin, and don't miss the Dr. Seuss-style Haggadah by Professor Eliezer Lorne Segal.  Dave Barry co-wrote For This We Left Egypt.  Also check out .If Moses Was on Facebook.  produced by Shoot East and the video Darth Seder.